When I was growing up, I was absolutely mad for awesome coming-of-age stories. The kind that stayed with me–the ones that I still have not forgotten, even today–are adventure stories. You know the sort. There’s an ordinary girl who lives what is otherwise an ordinary life, up until the point when she is snatched away by (take your pick) a trio of old women/a man in a desert cloak/an apparition from a dream. Thereupon she proceeds to kick ass and save her little brother/her country/the entire world. I’m sure many of you were right there with me, reading those books. Robin McKinley’s The Blue Sword comes to mind, as do Madeline L’Engle’s A Wrinkle in Time or Jane Yolen’s Dragon’s Blood. I grew up on those stories. I read them over and over and over and over, until the spines of the books cracked and entire pages fell out, not that it mattered, because I had those pages memorized anyway. 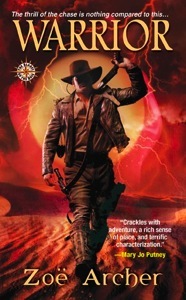 And so if you want to understand why everyone seems to be buzzing about Zoe Archer’s upcoming Blades of the Rose series, it is because the books capture that same sense of magic and discovery in the books I adored as a young adult–except this time around, they’re for adults. They’re not coming of age stories, of course; they’re much deeper, with emotions that resonate with the person that I am now, instead of the thirteen-year-old I once was. But there’s still that same sense of magical discovery inherent in them, that feeling that at any time in my normal life, I might meet someone who will slip me a compass, and the next thing I know, I might be the person who runs off on a voyage of discovery.

So let me tell you about Warrior, which is the first book in the back-to-back-to-back-to-back series filled with awesomeness. It starts when Captain Gabriel Huntley, newly returned from Crimea, happens upon a group of men beating up another man in Southampton, England. Huntley isn’t sure what is going on or why–all he knows is that the odds don’t look good for the loner. And besides, he’s not ready to settle down on English soil, not after all those years of adventure.

So he intervenes, and gets more than he bargained for. Over the course of the fight, he sees things that aren’t possible. And at the end, when the person he has helped has no other choice, he’s given a mission: to deliver a message and a stylized compass to Mongolia.

No, not even inner Mongolia; that would be too easy. Outer Mongolia. And Gabriel, who is deeply restless and unready to simply marry a fine English woman and spend the rest of his life getting fat over pints of beer, decides to go. And that is where the story, so far mostly familiar, begins to weave its threads of adventure.

The magic of this story is that it takes you to the windswept steppes of Outer Mongolia, delivers on that same sense of breathless discovery that I remember and love, while still rendering everything accessible. I thought about this for a long time, trying to decipher what it was that made the story seem so different, and yet so instantly recognizable all at the same time. And what I decided was that while the setting is rare and the world that Zoe Archer builds is unique, there’s a real sense of universality to the story. When Gabriel meets Thalia, she’s used to wearing a native dress called a del–but because Gabriel is English, she dons a regular English costume…to hilarious effect. And most of all, it is her emotions that are achingly familiar.

For instance, when she first encounters him, she’s wearing an ill-fitting, ugly gown. When her father sees her, dressed as an Englishwoman for the first time in years, they have the following exchange:

â€œWell, yes,â€ her father agreed. â€œBut I was also going to say: lovely.â€

And in that instant, it doesn’t matter that Thalia is something of an assistant Blade of the Rose living in Outer Mongolia, that her father knows secrets about magical things called Sources. Instantly, I understand the love and affection between them. Thalia’s the tomboy forced to play at dress-up. Without being told, I know that she’s going to ride fast, fight fiercely, and love with intensity. You know that she will lead you into adventure. It’s that same thread of human emotion that we recognize again and again in Thalia and Gabriel. Even though the book proceeds at breakneck speed across scenery that is larger than life, chasing prophecies, fighting off bands of mercenaries, running from with the villainous Heirs casting magic about that threatens their lives–throughout it all, Thalia and Gabriel remain people who we can identify with.

Near the end of the book, there’s a moment when Gabriel refuses to kiss Thalia. The scenery is new, but I still found myself getting just a little choked up right then.

Ultimately, that’s what makes this book so memorable. It’s not just that the scope of the story is sweeping. At the same time that Warrior takes you past monasteries and through magical outpourings of bright red flowers, it also tiptoes through territory that is both human and accessible. It precisely captures that feeling of magic that I remember so vividly from my childhood reading. And yet at the same time, it makes me feel so comfortable in Outer Mongolia that when the book ends, I’m surprised to lift my head up and discover that I’m still in my house, in the United States. For the space of a book, Zoe Archer makes Outer Mongolia feel as if it is truly my home. And that is dark magic indeed.

In any event, if you can’t tell, I am hugely excited about this book–and the rest of Zoe Archer’s series. I’m going to be giving away two copies of this book to commenters who answer the following question: Where would you like to see a romance set?