Courtneyâ€™s Note: This review was written by Mr. Milan. Courtney edited it only for length. We all know that Mr. Milan has no bias towards Courtney. None.Â  Admittedly, he is married to her, but a little thing like that would never lead him to soften his reviews.

Hello again. I’m Mr. Milan, Courtney’s husband. She’s asked me to read and review her debut novel, Proof by Seduction, even though my review of her novella was less than stellar.

Maybe Courtney thinks this time I’ll succumb to the temptation to speak well of her novel for the sake of domestic peace. Maybe she hopes my tastes have changed, that a story without any swordplay, without any characters attempting to vanquish their enemies by force, without an ending that pays the price of the hero and heroine’s triumph in gallons of spilled blood, will magically earn a good review from me.

Though I love her dearly, Courtney thinks wrong. I read Proof by Seduction from cover to cover, and I thought it sucked.

Courtney’s biggest failing is that she consistently fails to focus on the most interesting parts of her own story. Before I get into my review, I want to present this tendency of hers in pictorial form. Since a picture is worth a thousand words, I thought I would provide an illustration, or in this case, two.

This is how Courtney wrapped her Christmas present to me: 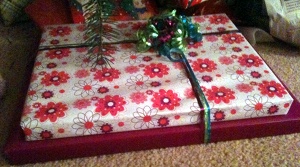 Are you seeing the problem? Bows. Ribbons. Curls. Flowers. The present inside was great, sure, but what was with all that stuff on the outside? I showed her how to really wrap presents with my gift to her: 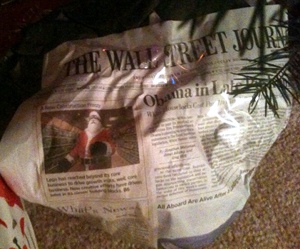 I’m sure you can all see my point here: Courtney focuses on the uninteresting parts. But let’s get back to Proof by Seduction. Courtney gives us a hero, Gareth Carhart, the Marquess of Blakely, who she tells us has lived in the jungles of Brazil. Great. She has my attention. That’s cool!

But does Courtney give us any scenes to flesh out that adventure? No. Lord Blakely must have had to defend himself from jungle predators in Brazil, right? How did he do it? Did he shoot them? What kind of gun did he use? Who manufactured it? What did the after kick feel like? How many guns did he have? I want to read about that one time when Lord Blakely and his party were surprised one night as they sat around a campfire, listening to monkeys howling in the jungle blackness, by an an enormous jaguar who managed to drag away two of Blakely’s companions (to be eaten later) before coming back for Blakely, who had just managed to load his rifle and…

But instead, all we learn about the Brazil trip is… that it taught Lord Blakely how to make his own breakfast.

Memo to Courtney: Breakfast? If you want to write a really good book, write about the exciting stuff!

Courtney’s story telling ability when it comes to her heroine is no less frustrating. Jenny Keeble is the only character smart and resourceful enough to challenge Lord Blakely (who presumably doesn’t carry rifles in London, for some odd reason), and I have to admit that their (metaphorical) dueling reminded me (metaphorically) of the light saber battles between Obi Wan Kenobi and Darth Vader, or Luke Skywalker and the Emperor, or Yoda and the Emperor. Two skilled combatants, evenly matched, kicking each other’s butt.

So how did Jenny get to be such a bad ass? We’re told she was sent to a school when she was four and abandoned by her parents, and that she was a troublemaker. She pissed off the old schoolmarm so much that years later, the old crone wants to see her get what she deserves.

Wow! Jenny must have been a real cool dude in school. Courtney, show us scenes of her being bad ass! But alas. Does Courtney give us any examples of Jenny being a rolling terror in her school girl days? How about a scene where she’s throwing spit wads at the teacher when her back was turned? Or how about the time when Jenny learned to do a karate chop and she broke this other girl’s arm, and then she whirled around and did a groin-kick to this other prissy girl, while ducking under the teacher’s arms? Where are those scenes, huh? What a missed opportunity!

Courtney could have earned a whole extra Sherman Tank from me had she written about just one of Jenny Keeble’s schoolyard fights, preferably with blood and/or breaking bones.

To sum up: Proof by Seduction has a great hero and heroine, but Courtney doesn’t write enough about why they’re great.

Bottom Line: One and a half out of five Sherman Tanks.