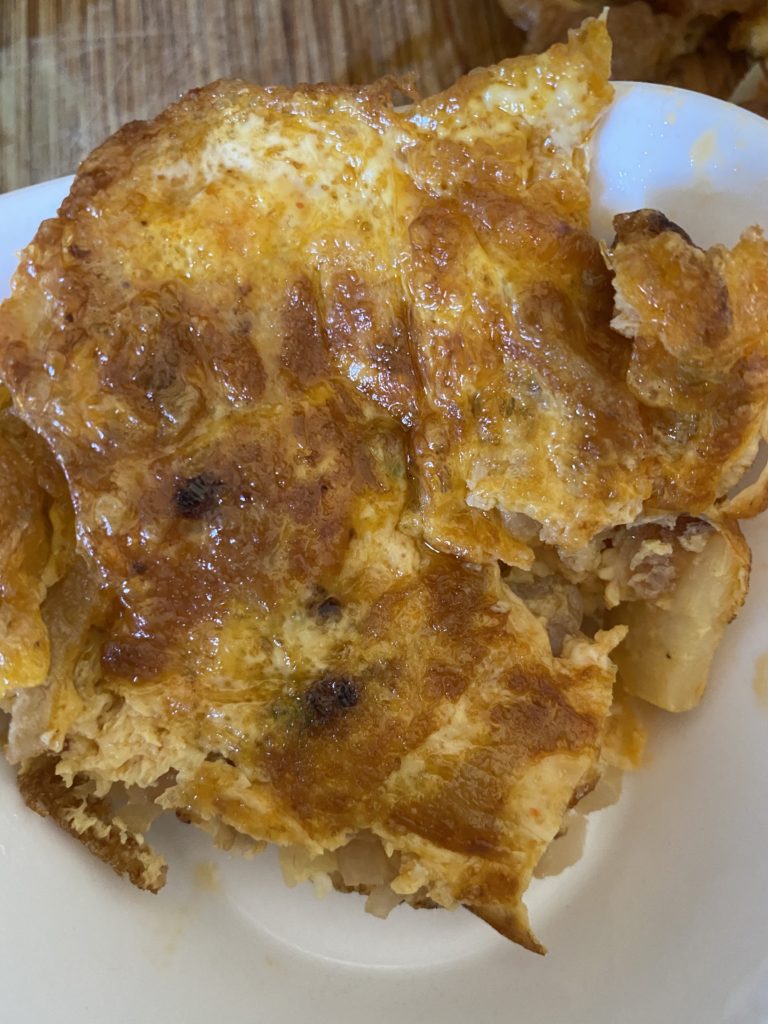 This is a very simple dish that is delightful and easy to make... if you have the right ingredients. This was adapted from a similar recipe from Linda Anusasananan’s Hakka Cookbook. It does take a little bit of preparation before hand to soak the radish to remove salt, so be aware of that.

This recipe is a per-person serving size—that is, this will feed one if you have maybe rice and a vegetable as a side, or two if it’s one of many sides.

1. Take about 1/3 cup of preserved radish, and toss it in a large-ish bowl with water. Swirl it around to rinse off the initial coating of salt, then add more water and let it sit.

Note: The preserved radish is very salty. The longer you let it sit, the less salt you will have. I have... no memory for things, so I either get wildly impatient and pour out all the water after five minutes, which makes this extremely salty, or forget it exists for two hours, which means it’s not salty at all. I think 20 minutes is supposed to be the right timescale, but I have never managed to get it there, oscillating between the wild extremes of massive impatience and massive forgetfulness.

Second note: I argued with myself for a very long time about “long swirls of preserved radish,” mostly because the Asian radish (like the daikon) is not at all like what we think of as a “radish” when we get it from the store, and how long can your swirls of preserved radish get if you’re imagining a 1” diameter vegetable? Would they even be able to get daikon in Wedgeford in 1891? Should I use turnips?

Finally I decided that Andrew didn’t start a seed exchange for them not to have Asian radishes. Hence: radish.

This diversion explains how I manage to forget that I have radish sitting on the kitchen counter for hours at a time.

So back to the radish. Once you remember you have radish sitting in a bowl of water on your kitchen counter, drain the water, squeeze out the radish so it’s kinda dry, and move on to the next step.

3. Chop up one scallion, separating the white parts and the green parts.

4. Throw some oil in a wok (or a regular pan) and turn heat onto medium. Add the white parts of the scallion, cook for a minute. Now add your radish (and water chestnuts if you’re doing that). Cook for another minute or two, then turn the heat down to medium low. Finally, pour the egg on top of your vegetables. Add the green parts of the scallion, mix with chopsticks, then let sit until it’s about halfway cooked, then flip it so it’s cooked all the way through.

5. Cut into wedges. Salt to taste. Remember that if you didn’t let the radish sit for a reasonable time in water, this is going to be wildly salty, so be very circumspect with the salt. I love this served with rice.